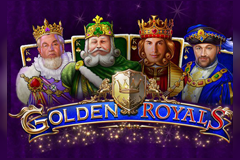 The Golden Royals slot, a sharp 30 payline, 5 reel video slot. Playing this well designed royalty themed slot brings a ton of fun by displaying graphics including king of hearts, king of spades, king of Diamonds, king of clubs, queen of hearts, queen of diamonds, Queen of Spades and queen of clubs. Along with these there are also jack of hearts, jack of diamonds, jack of spades and jack of clubs that add the feeling of this sharp royalty slot. Golden Royals allows you the choice of wagering for a minumum of $0.01 on a slot spin. Also, you also can use all 30 lines to up a bet as big as $24. The wild chest symbols fortunately substitutes for the values of everything excluding the crest symbol, maximizing your ability of wining big. Take note that the scatter symbols on the Golden Royals the crest, these icons pay out if there are many located anywhere. These special crest symbols do not need to be on the same payline to launch the win. As with a lot of other games having more than two Scatters usually starts a bonus round game. Slots such as Stellar Stones, Cuba Caliente and Lucky Mai Tai have the same slot setup.

Golden Royals is a good slot machine, the royalty design along with The King of hearts, king of spades, king of diamonds, king of clubs, Queen of Hearts, queen of Diamonds, Queen of Spades and queen of clubs was well thought out and the pay outs seem good. Other games like VIP Filthy Rich share in much of the same design. In closing we think Golden Royals is an entertaining game with hardy wins and images.

The Golden Royals bonus round

In the playing of Golden Royals, you can really get ahead with credits, to do this get a bonus round win! Here are some detail on the extras you can score. A Free Spins is activated once you achieve three or more crest scatter symbols anywhere on the gameboard, this bonus game appears to produce quite well. A Random Wild Multiplier is begun once you achieve random chance during the Free Spins feature, this extra element in my experience appears to pay out extremely good. If you like big piles of riches, the Corner Kings Feature will not disappoint you. It's as simple as getting king symbols landing on four or any three corners of the game board for a great pay out. Like all bonuses, the Golden Royals bonuses is where you can really score a giant bonus win. you can be distracted from the game play.